Happy Thanksgiving, my darlings! We’re not doing much for Thanksgiving around here this year, but what we are doing is mixing up some delicious cocktails for the occasion.

This “Apple Pie Cocktail” is our current favorite. It’s an adaptation from one of my favorite vintage Patrick Duffy books and it’s a delight. It’s a refreshing cocktail with seasonal notes of fruit and apples. Be careful with this one! It goes down really smooth so pace yourself. Now go rummage through grandma’s liquor cabinet for that apple brandy and start mixing!

Here’s what you need:

Shake well with ice and strain into a glass. I garnished mine with a pie crust spiral.

To make the pie crust spiral, just take a strip of pie dough and wrap it around the handle to a metal spoon or something similar and bake for 10-15 minutes. Remove the spiral from the mold before it completely cools and is still somewhat pliable and then let cool completely.

Tomorrow is the 4th of July and I don’t know about you, but I plan on laying poolside with a tropical umbrella drink in my hand. I like to be as festive as possible with my holidays so I decided to do a layered red, white, and blue cocktail based on my favorite tiki style drinks.

Here’s how you make it!

First mix the pineapple juice and grenadine in a glass. Add crushed ice. Add blue curaçao (pour over an upside down spoon, it helps the liqueur land evenly and not too heavily). Add coconut rum in the same manner. Garnish.

When you’re ready to drink it, use a straw to mix it all up and enjoy! In honor of today being World Cocktail Day I figured it would be the perfect time to tell you about Shaker & Spoon, a cocktail subscription club that I tried out this month! Shaker & Spoon sends you everything you need to make 3 different cocktail recipes (4 of each, 12 cocktails total). We’re talking syrups, bitters, garnishes, mixers, citrus—everything is included besides the alcohol. Each month is based on a different spirit, so you have the opportunity to try something new with each box. It also makes a great gift for the cocktail lovers in your life.

This month was the agave blanco box. Tequila! My favorite.

It was stocked with produce, syrups, bitters, chiles, and even a little bottle of tajin to rim glasses. The easy to follow recipe cards give you all the info you need from instructions to what type of glass to use.

The first recipe I tried was a refreshing cocktail made with cucumber, chili pepper, and limes. 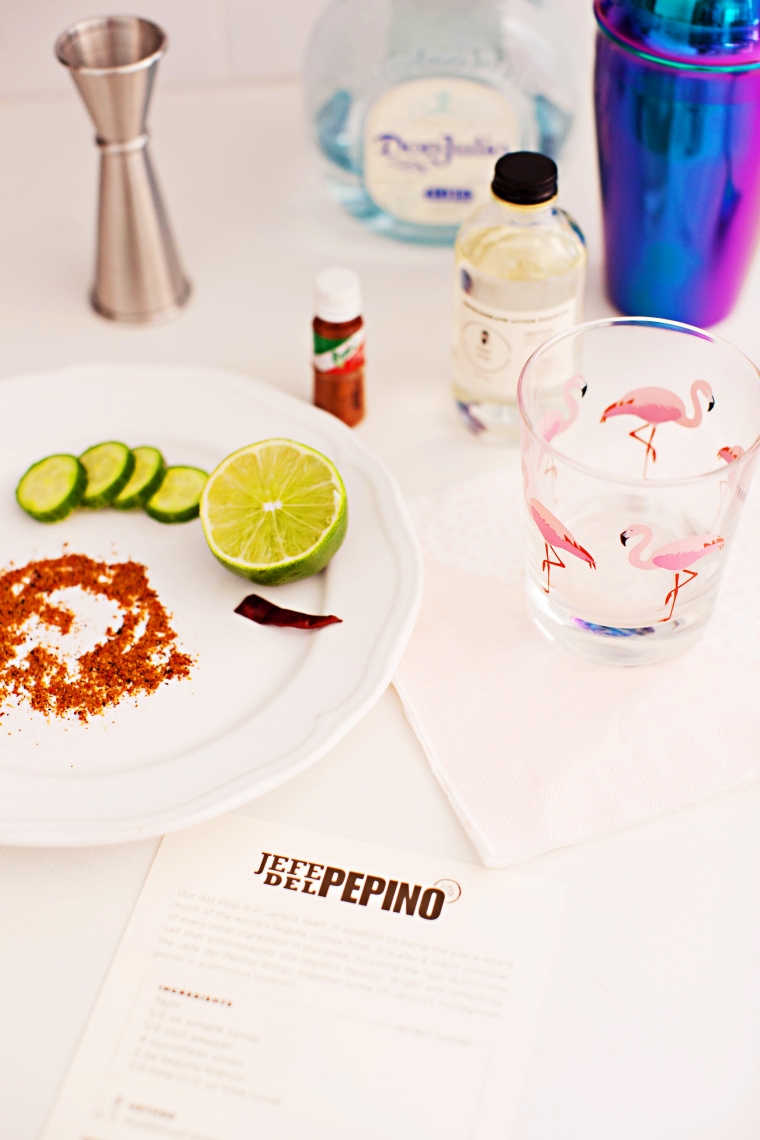 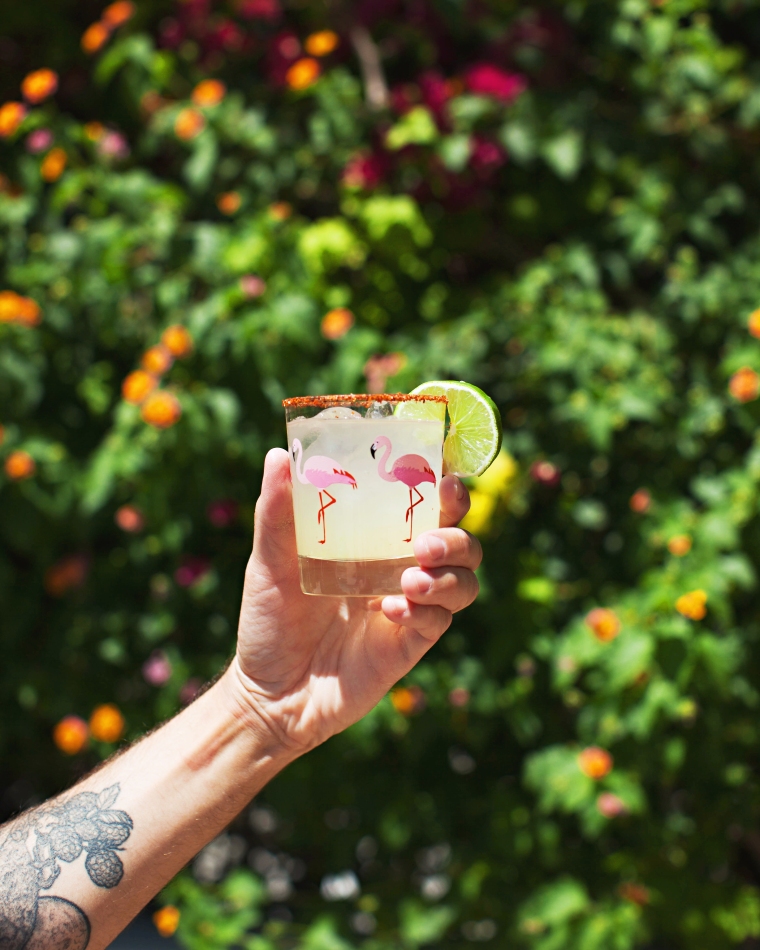 The next one is a Mexican version of a moscow mule. It was made with a delicious Mexican spice syrup and ginger beer. 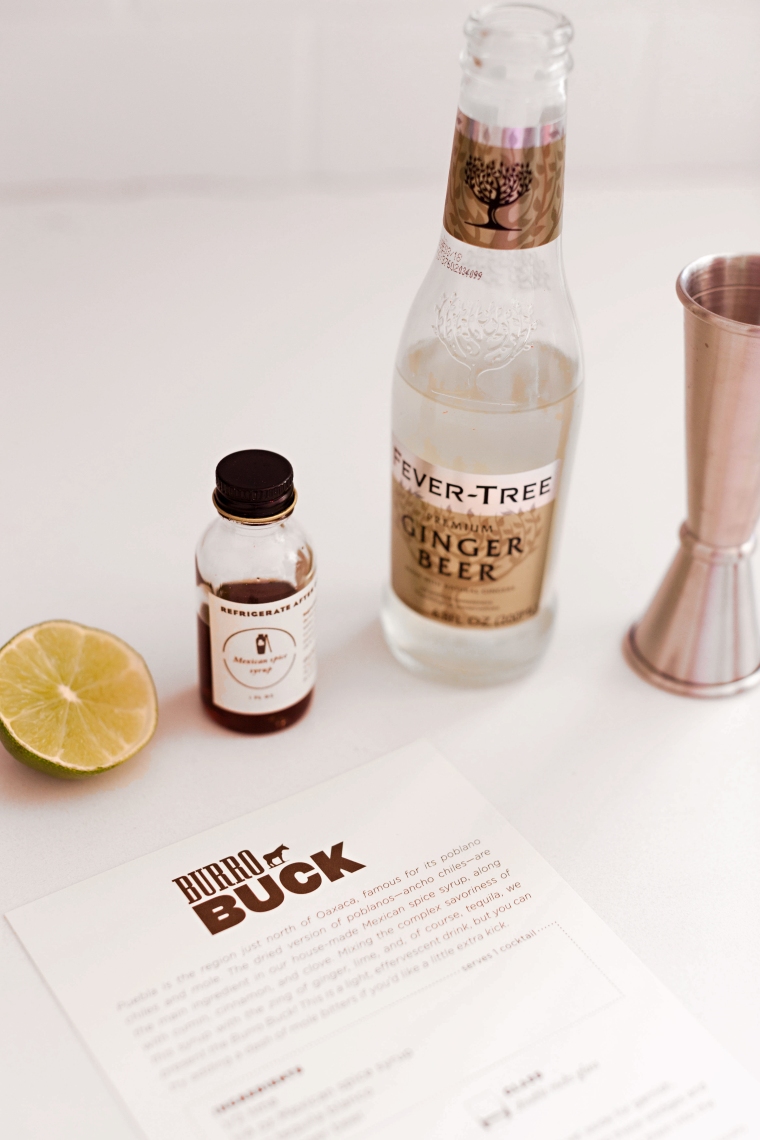 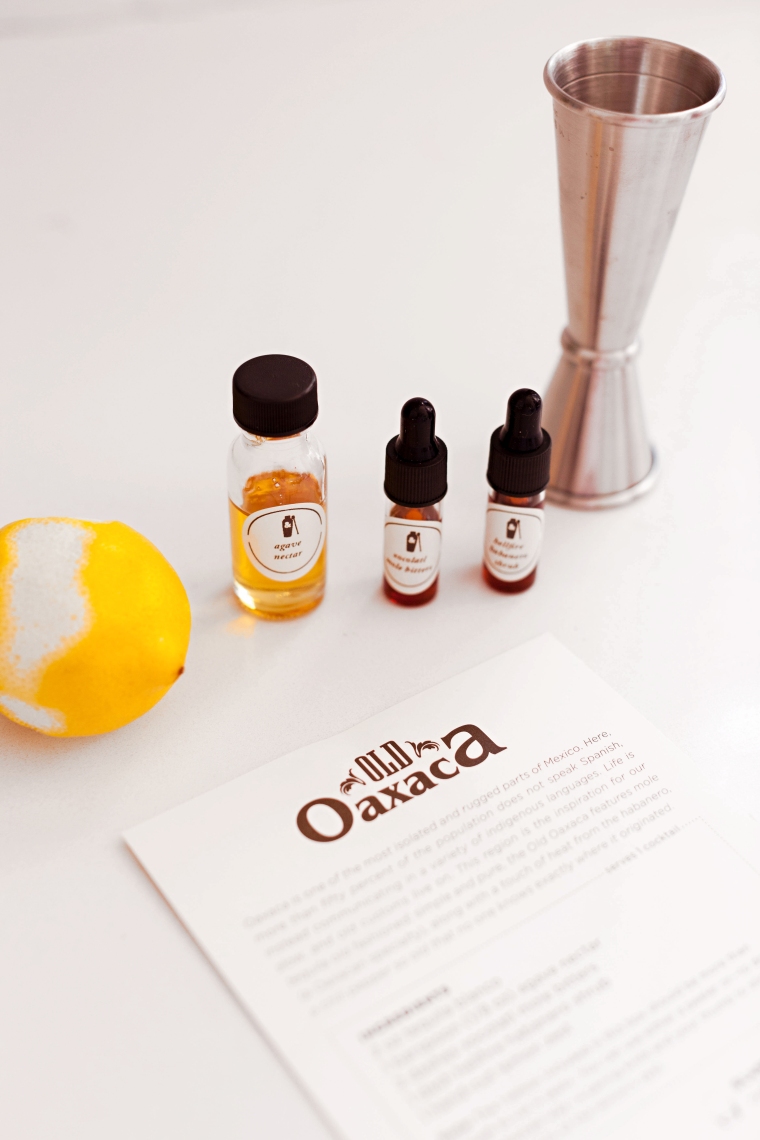 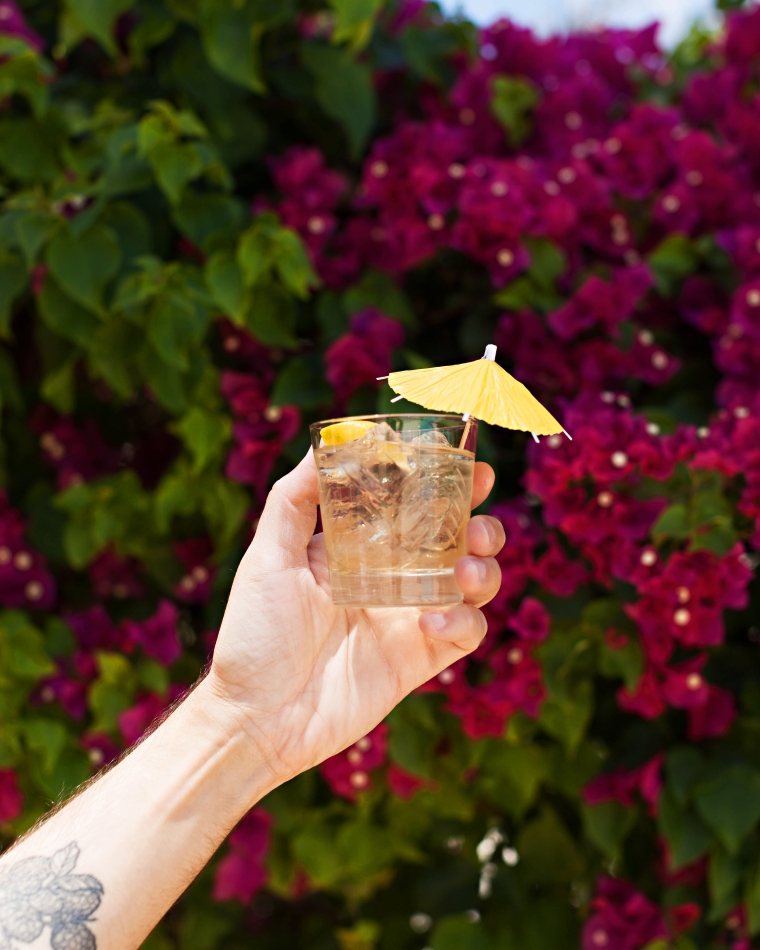 Thirsty yet? You can sign up now and receive $20 off any subscription with the discount code ‘melodrama’!

The next box is Sake (the Japanese fermented rice liquor) and Shaker & Spoon will be donating a portion of proceeds to the Helen David Relief Fund, which assists women in the bar industry who are fighting breast cancer. If you’d like to further support this great cause and will be in Las Vegas on May 19th, you can attend the annual For the Love Of Cocktails event! They will be raising money for the HDRF and showcasing 35 cocktails by bartenders from around the country.

This post was sponsored by Shaker & Spoon but as always, all thoughts and content are my own.

Easter time is upon us and that means it’s Cadbury Egg season!

You know the ones! Those chocolate eggs filled with a sweet candy creme. They’re everywhere! My husband brought some home and instead of just sitting around eating them we decided to get creative at cocktail time.

I present you the Cadbury Creme Fizz!

In a mason jar or cocktail shaker pour the vodka, heavy cream, cherry syrup, and Cadbury Egg Creme. Whisk vigorously to make sure the egg creme is well incorporated. Add ice, cover, and shake well until the outside is frosty. Strain into two coupes, top with club soda, and serve with a Cadbury Creme Egg. 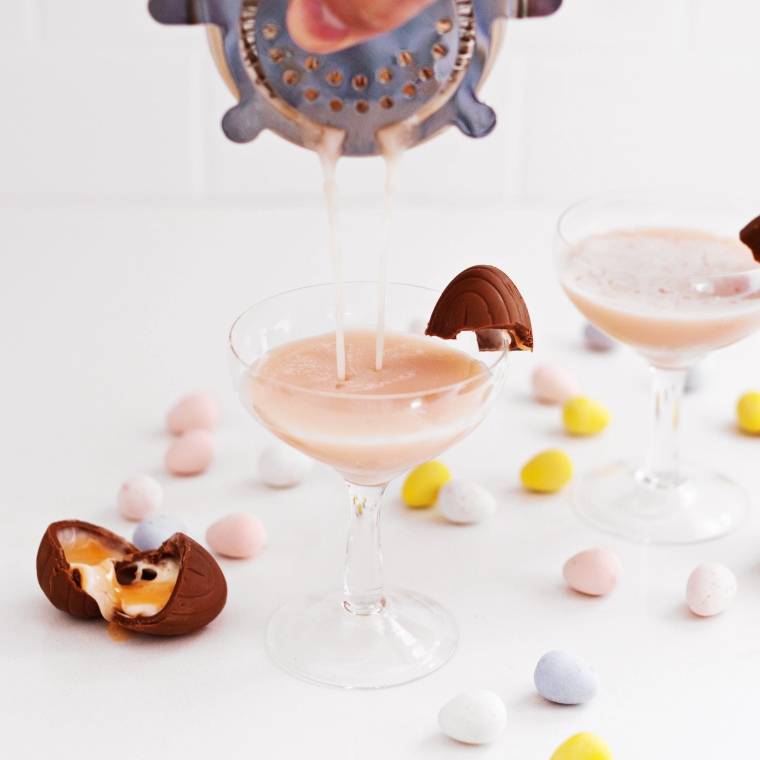 That’s right! Garnish with your left over Cadbury Egg chocolate shells. It tastes so good when you eat the chocolate along with sipping the cocktail. Yum yum. 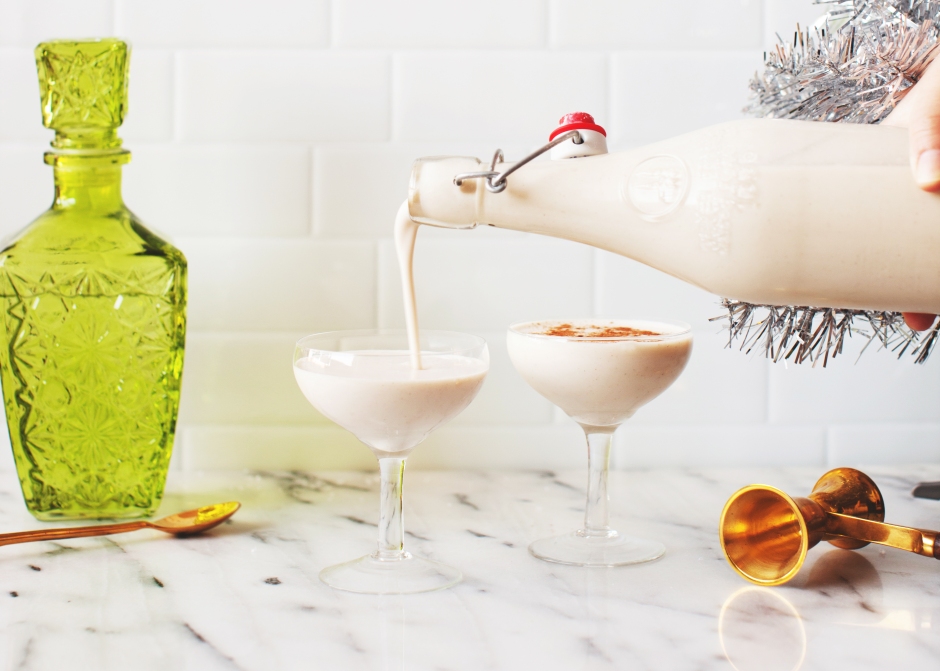 We all have traditional comfort foods and drinks that taste like the holidays to us. You know, the ones that you just can’t do without and look forward to having once a year, every year? For my husband it’s Coquito, a creamy Puerto Rican coconut and rum based drink. For him it’s just not really Christmas without it.

Every family has their own recipe and preferred way of making it, some use egg yolks making it more of an eggnog-like drink, but the mainstays are always coconut cream and rum, and lots of it. 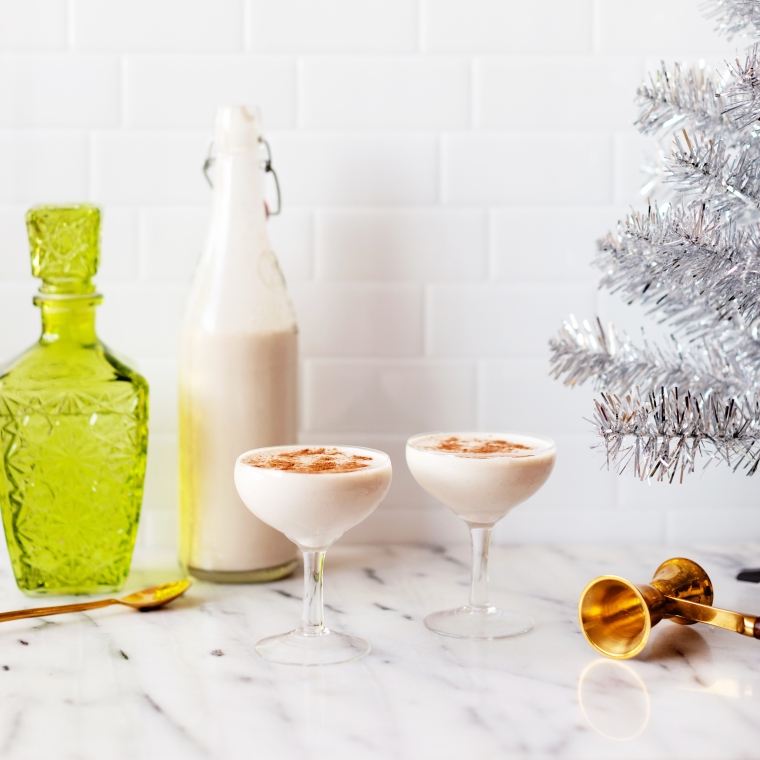 Here’s our favorite recipe given to us by my husband’s aunt. Thanks, Titi Pily!

You’ll be making a sort of tea with the ginger, cinnamon, and cloves. First, peel the ginger and chop into large chunks. Place the ginger in a medium saucepan and muddle until all pieces are smashed. Then, add the cinnamon sticks, whole cloves, and water to the pan, and bring to a boil over medium-high heat. Once it reaches a boil, lower heat, and simmer until the water turns brown, about 20 minutes.

Once the tea is ready, strain into a large measuring cup, you should be left with about 1 to 1.5 cups of liquid.

Add evaporated milk, coconut cream, coconut milk, sweetened condensed milk, rum, vanilla extract, ground cinnamon and 1 cup of the tea to a blender (or a large bowl if using immersion blender) and blend on high for 1 to 2 minutes, until everything is well blended.

Pour the Coquito into glass bottles or mason jars and refrigerate until it’s cold. Once it’s ready to serve, shake the bottle or jars to make sure everything is well combined, pour into small serving glasses, and top with a light sprinkle of ground cinnamon.

Hello, friends. I’m going to give you a quick little recipe for something often I drink to avoid drinking actual water (because water sucks).

I love watermelon and usually have it in my refrigerator at all times if possible. Most of the time I’ll eat some and then use the rest to make agua de sandía (watermelon water). This has always been my favorite agua fresca (aside from horchata of course), and I’ve played around with a few variations, but this is one of my favorites for this time of year because it incorporates lemon and rosemary. I don’t like mine to be too sweet, but you can adjust the sugar to your taste depending on how naturally sweet your melon is. 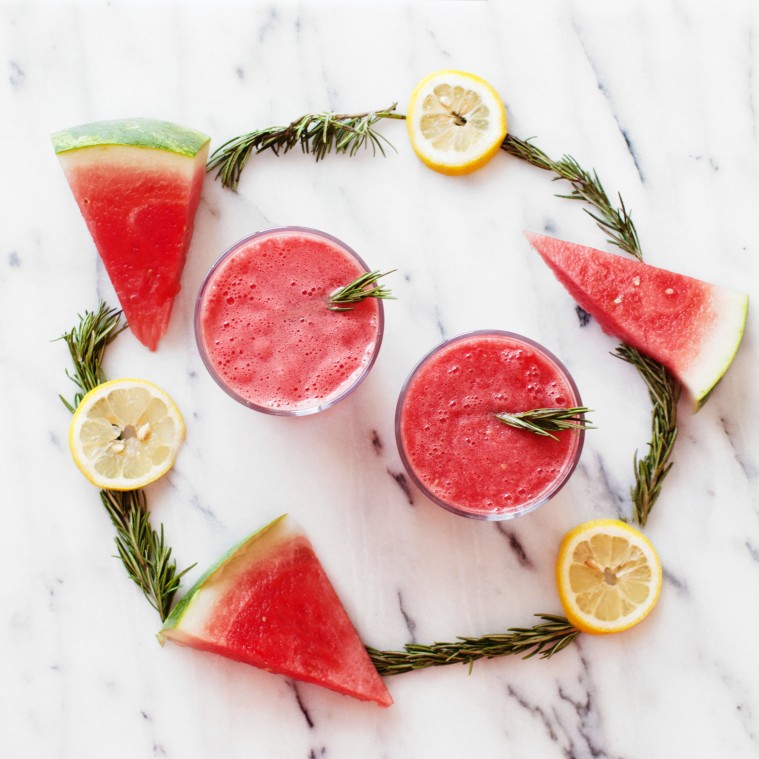 Inside of a large pitcher, muddle the sugar and sprig rosemary. In a blender, blend watermelon and water together. Pour watermelon mixture through a strainer into your pitcher (sometimes I skip this part if I’m feeling pulpy) and stir until the sugar is dissolved. Add ice and serve cold.

(Optional: Add a shot of tequila and sing Beyonce’s lyric “I’ve been drinkin…watermelonnnn”.)

Autumn is here and it’s time to start knocking back the ciders! I love apple cider in any way possible, especially with liquor. Since it’s still an inferno here in California we’ve been drinking more refreshing versions of my favorite autumnal beverage, like this cocktail made with elderflower liqueur, vodka, and sparkling water.

Shake cider, vodka, and St. Germain with ice. Strain into glass and top with sparkling water. Garnish with an apple slice.