A while back I was shooting some engagement pictures for my friend at an abandoned ranch area in San Diego and we noticed a lot of animal bones around. I mentioned to her that I thought they would make cool home accessories and even Halloween decorations if they were cleaned up. They can be quite expensive at trendy stores. She didn’t have much to say about the subject, but a few weeks later her husband showed up with a paper bag containing a goat and cat skull for me. I was pretty stoked about the goat skull but I won’t lie, the cat skull still creeps me out a little, because aww kitty. I saved it for later (for you know, like, spells and stuff), but I got down to business with the goat.

I know the idea of cleaning animal bones probably sounds creepy to some of you. I don’t really blame you. At certain points it kind of weirded me out too — like the moment I realized I was brushing a dead goats teeth. It’s fiiine. You’re recycling.

Anyway, the first step is to clean off whatever dirt and grime you can using warm water and a soft tooth brush.

Next, you’re going to soak the skull in 40% liquid peroxide. You can get this at beauty supply stores. It’s basically the developer you use for dying your hair. Regular peroxide from the pharmacy isn’t strong enough. 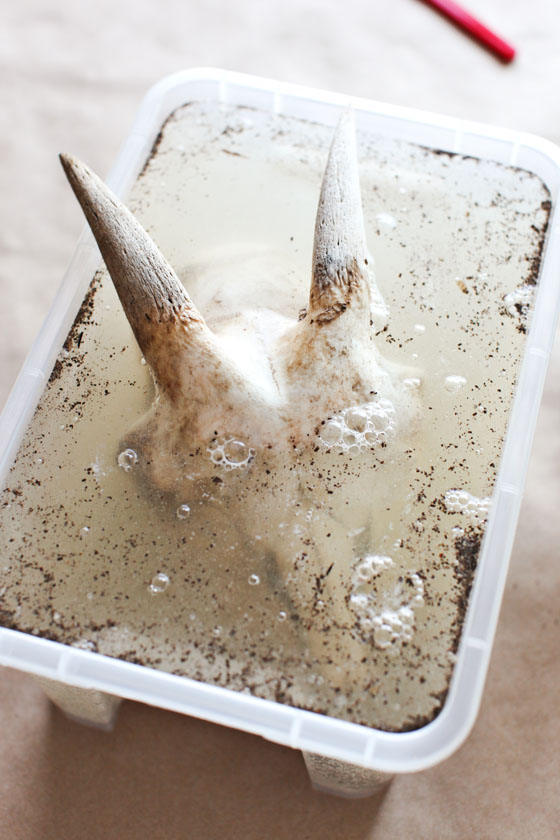 Then you’re going to soak it for as long as it takes. You want any grime, fatty deposits, and stains to dissolve or break away from the bone. This could take a few weeks depending on how dirty your bones are. There are other methods you can use, but peroxide and patience is the best for this kind of relatively clean skull. By that I mean no remaining flesh or hair on the bone. Jakes Bones is a really good resource for other methods and techniques. A great tip from Jake is to not get peroxide on the antlers or horns because “it looks rubbish”. So I obviously tried to avoid that.

I let the goat skull soak, covered with a tea towel, for about 2 weeks. I topped it off with warm water any time the liquid level got a little low. I was a little worried that it wasn’t going to be white enough, but I had to leave on a trip and didn’t want to leave it soaking unattended for too long. The problem with wet bones is that they can look brown or dark, so it’s sometimes hard to tell if you’re at the level of whiteness you want. Let dry and check it out. If it needs more time, just put it back in the bucket for a few days. When your skull is ready give it a quick rinse and remove any remaining debris. Let it dry in a sunny spot for a day or two.

As you can see it dried nice and white. 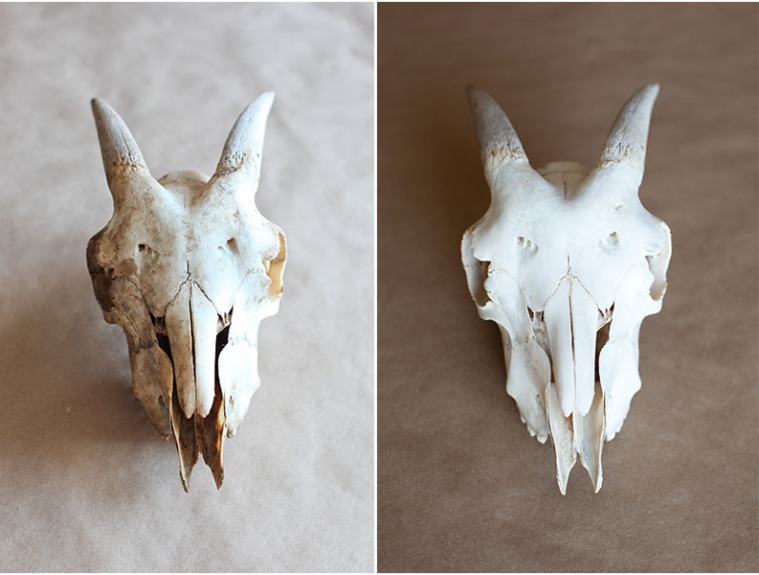 Now you know what to do if you ever find a cool looking animal skeleton and want to try to use the bones for decor or art.

I went a little further and added a little copper leafing to mine by using Martha Stewart Crafts gilding products. 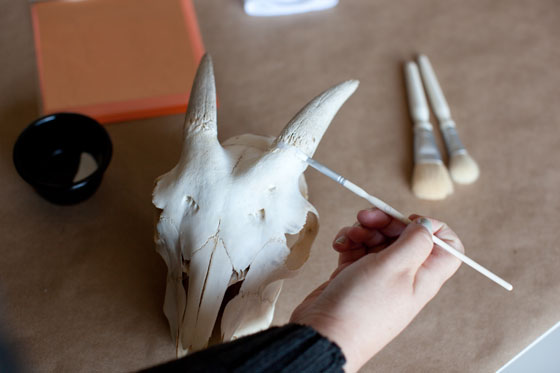 I brushed gilding adhesive onto to the areas I wanted to cover. I didn’t go too far up the horn because it’s very porous and probably wouldn’t stick, plus I like the texture and natural color.

Let the adhesive dry a little to become tacky enough for the gilding sheets to stick to.

Tip: These little gloves are great to prevent your fingers from sticking to and ruining your gilding sheets. 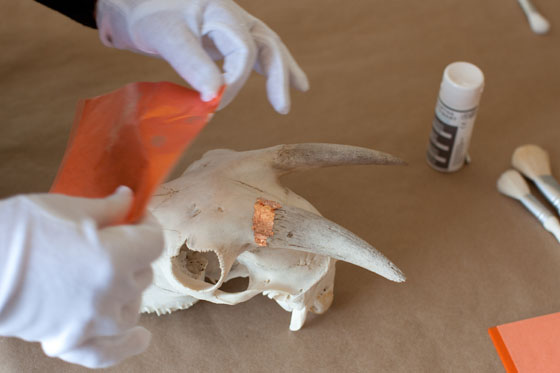 Next, just brush away any excess by using a soft bristled brush. 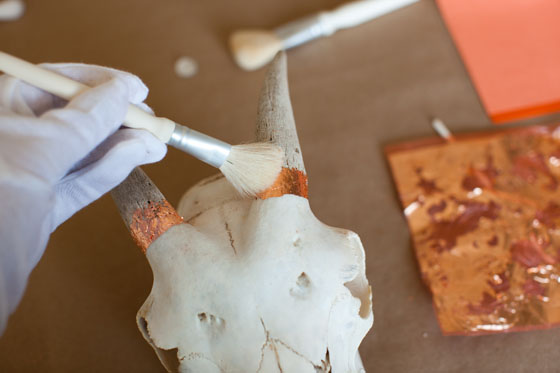 I like the texture and finish the copper leaf much more than paint. 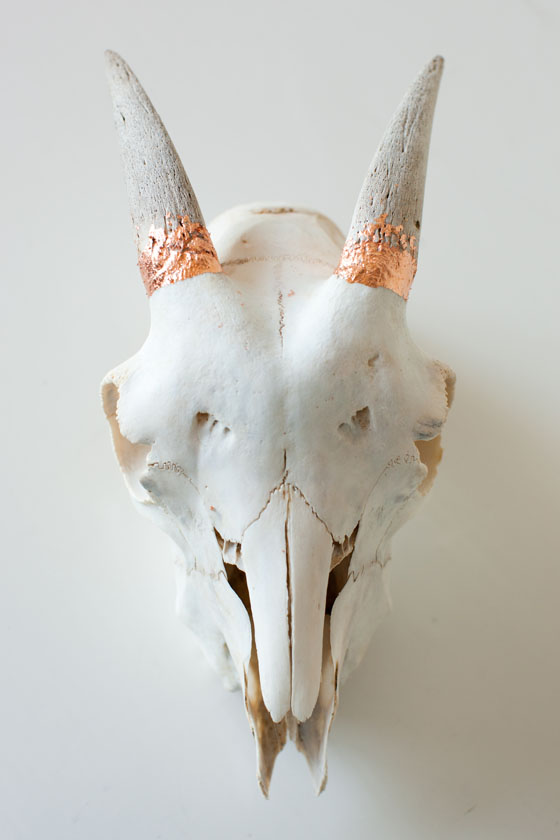 Check it out looking all snazzy on my bar cart. 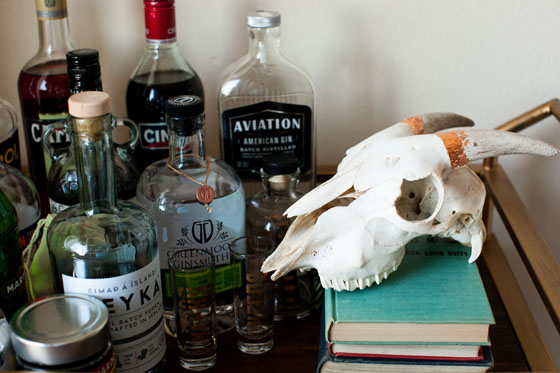 17 thoughts on “DIY: Here’s How To Clean Animal Bones So You Can Use Them As Decor”